Have you EVER been to SPACE? Well, say no more.

EVERSPACE is an action-packed single player space shooter with roguelike elements and non-linear story line. It is set in a vast space and well-crafted universe with stunning visuals. But don’t let the sceneries fool you. Though as jaw dropping as it may seem, it also contains a lot of surprises and danger to make your journey even more challenging. Space exploration is also part of the game that lets you craft and scrap for weapons, armors and ship upgrades that will further boost your survival as you explore and progress. 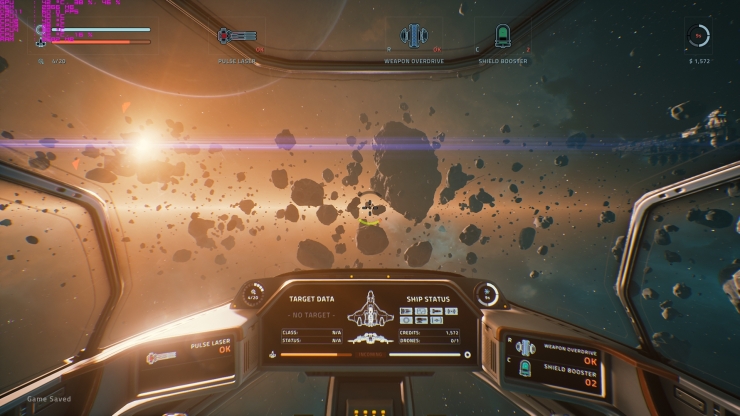 The goal of the game is for you to literally die (it has permadeath feature), use the credits you scavenge for upgrade or purchase new ships and to die less while you traversing stages or sectors of the game. Each run may take 1 to 2 hours depending on how you explore the space. Be it clearing each sector, going full sprint to the next sector or just exploring the vast space.

Each sector runs differently. Even if you fail the last trial things will not be the same. The enemies and allies you encountered will also be different, making each run feels like a new start. A lot of optional challenges are also available if you to earn more credits for upgrade.

The stunning visuals are very mesmerizing making it the eye candy of the whole EVERSPACE. If you’re not in the mood for dogfights, you can also stroll and wander in the space before you jump on to the next sector. Just make sure not to mess with other space fighters.

With so many details on the screen, the game is GPU heavy and can make your system run hot. So better make sure your cooling system is sufficient enough not to overheat it.

Minimum Requirements to run the game:

Recommended requirements to run the game:

Even in low settings, the game still looks fantastic. Everyone can enjoy the beauty of space in EVERSPACE whether they have beefy rig or just to meet the minimum requirements.

EVERSPACE is best played using mouse and keyboard as described in the game. But for those who are currently learning how to fly a spaceship, this might be a daunting task. Thankfully, the button mappings are noob-friendly and easy to memorize. Dodging those space bandits might seem too easy after all!

For those who are not fond of the keyboard and mouse combo, you can also use controllers such as Xbox 360/One Controller or even your PS4 controller. HTC Vive and Oculus Rift are also supported in this game.

EVERSPACE is built on Unreal Engine 4 that is why it looks so stunning and amazing. There are moments where you just want to pause the game and  click that ‘action shot’ option for that wallpaper worthy shot. But, if you are looking for a game with linear story line, EVERSPACE may not provide it to you. Shoot, Kill, Craft and Build. Just don’t die early so you can collect thousands of credits for upgrades. The game is fun and can take away a couple of hours just to reach that next sector but can be repetitive at times since you’ll basically do the same thing every round. But with good balance of graphics, sound design and controls, EVERSPACE rewards you with an immersive gaming experience that lets you fly through space.